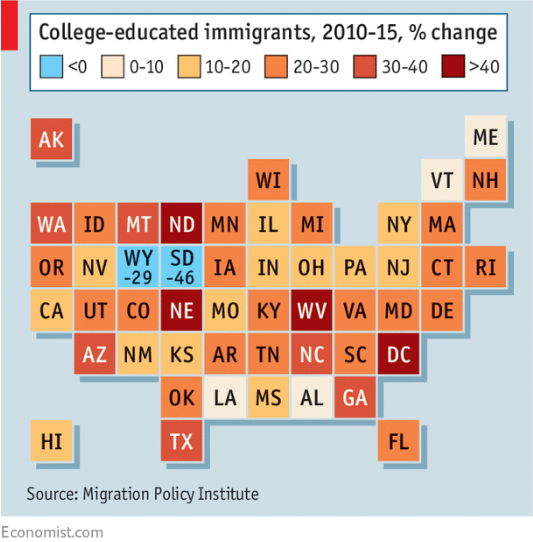 There are some indications that the immigration crackdown may slow economic growth:

One-third of the approximately 20 employees Martinez uses to build new homes and commercial spaces have recently fled the state, spooked by a combination of a federal immigration crackdown by the Trump administration and a tough anti-“sanctuary cities” law approved last month by Texas’ Republican-controlled Legislature.

“I took a big hit since my workers started hearing crazy stories about being deported, and they panicked,” said Martinez, who relies on immigrants in the U.S. illegally for labor and has failed to find replacements for the physically grueling, precise work.

“The Americans I hire can’t last in this job more than half a day,” Martinez said.

And it’s not just about the quantity of workers, immigration also boosts the quality of the workforce:

JOSÉ ROMMEL UMANO, who is originally from the Philippines, moved to New York last autumn. He came on a family-reunification visa and joined his wife, who had been living in America for some time. This is a typical tale: America gives more weight to close family members when considering immigration applications than some other rich countries do. More surprising is that Mr Rommel Umano arrived with a master’s degree from the University of Tokyo and 20 years of experience as an architect in Japan. Yet this, it turns out, is typical too. Nearly half of all immigrants who arrived between 2011 and 2015 were college-educated. . . .

The result is that America has switched from importing people who are, on average, less educated than the natives to people who are better schooled.

For the past several years I’ve argued that 1.2% is the new trend rate of growth in real GDP. I see no reason to change that forecast.

I have no way of knowing if 1.2 is a trend rate of growth for real GDP (a depressingly low growth of GDP per capita if true), but is the estimate conditional on markets expecting future recessions caused by future failures of the Fed to follow an NGDP level target and failure of federal and state governments to invest according to an NPV rule during recessions? Do you have an estimate of what the trend would be with optimal policies?

I’ve been pointing this out for a while, but illegal immigration declined sharply in 2008, almost a decade ago, and the total illegal immigrant population has since leveled off. There is probably some annual turnover, but most “illegal” aliens have been here over 10 year by now, and many are married to US citizens and have US citizen children (which is why Trump’s revocation of DAPA is so inhumane).

It’s very hard for unskilled immigrant to get legal visas, so it’s not surprising that more immigrants today are college educated. Also the Mexican economy is much better now than it was 20 years ago (thanks partly to NAFTA), so there is less incentive for Mexicans to migrate north to get work. More of our immigrants are coming from further south now – Central America. (If you’re really bothered by Hispanic immigration we should expand NAFTA to include Central America.)

If you’re really bothered by Hispanic immigration we should expand NAFTA to include Central America.

Sounds good to me, actually.

“I have no way of knowing if 1.2 is a trend rate of growth for real GDP (a depressingly low growth of GDP per capita if true),..”

And neither does Scott. Notice that he doesn’t say how long the new trend rate will last. Tyler Cowen has said he expects his Great Stagnation to end in the 2040s, so I’d like to hear what year Scott thinks the 0.5% per capita will get back to the historical 2.0% rate.

Thaomas, No, as I don’t know which optimal policies we should consider.

Todd, It may end at some point, but that’s not something I expect to occur. If I had to guess the growth rate 70 years from now, I’d guess around 0.5% per person.

OK, your stories mean nothing. You could put together 100 stories from WW2 showing US was bad guy. We were not.
Most illegals are unskilled and put strain on other resources. Also, if guy in Austin has problem finding workers, let him raise wages. Right? Is that not economics 101?
1.2%. It was 2% over last several years. I guess deregulation is going to slow down growth.

If the first story is correct, then, contra Hazel Meade, there is still a lot of illegal immigration.

When Robert Putnam runs a proper statistical horserace, one of his favorite predictors of trust - diversity - barely matters.  To recap:Now a diversity skeptic could look at Putnam's results and say: "Fine, diversity per se is no big deal.  But Putnam does show that blacks and Hispanics have low trust.  ...

The tragedy of Grenfell Tower and some Internet de...

Last week, Grenfell Tower in North Kensington, London went up in flames. At least 58 people died, including two young Italian architects. In my own country, therefore, the story was quickly picked up in the media - and it is a tremendously sad one. The young couple called their respective families when the fire began ...

There are some indications that the immigration crackdown may slow economic growth: AUSTIN, Texas (AP) -- Though construction is in high demand in Texas' booming capital city, Oscar Martinez's drywall company is suddenly struggling. One-third of the approximately 20 employees Martinez uses to build new homes and comm...