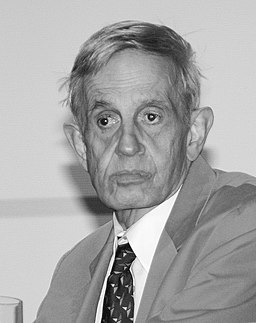 John Nash, john harsanyi, and reinhard selten shared the 1994 Nobel Prize in economics “for their pioneering analysis of equilibria in the theory of non-cooperative games.” In other words, Nash received the Nobel prize for his work in game theory.

Except for one course in economics that he took at Carnegie Institute of Technology (now Carnegie Mellon) as an undergraduate in the late 1940s, Nash has no formal training in economics. He earned his Ph.D. in mathematics at Princeton University in 1950. The Nobel Prize he received forty-four years later was mainly for the contributions he made to game theory in his 1950 Ph.D. dissertation.

Nash’s major contribution is the concept of equilibrium for noncooperative games, which later came to be called a Nash equilibrium. A Nash equilibrium is a situation in which no player, taking the other players’ strategies as given, can improve his position by choosing an alternative strategy. Nash proved that, for a very broad class of games of any number of players, at least one equilibrium exists as long as mixed strategies are allowed. A mixed strategy is one in which the player does not take one action with certainty but, instead, has a range of actions he might take, each with a positive probability.

A simple example of a Nash equilibrium is the prisoners’ dilemma. Another example is the location problem. Imagine that Budweiser and Miller are trying to decide where to place their beer stands on a beach that is perfectly straight. Assume also that sunbathers are located an equal distance from each other and that they want to minimize the distance they walk to get a beer. Where, then, should Bud locate if Miller has not yet chosen its location? If Bud locates one-quarter of the way along the beach, then Miller can locate next to Bud and have three-quarters of the market. Bud knows this and thus concludes that the best location is right in the middle of the beach. Miller locates just slightly to one side or the other. Neither Bud nor Miller can improve its position by choosing an alternate location. This is a Nash equilibrium.

Nash’s other major contribution is his reasoning about “the bargaining problem.” Before Nash, economists thought that the share of the gains each of two parties to a bargain received was always indeterminate. But Nash got further by asking a different question. Instead of defining a solution directly, Nash asked what conditions the division of gains would have to satisfy. He suggested four conditions and showed mathematically that if these conditions held, a unique solution existed that maximized the product of the participants’ utilities. The bottom line is that how gains are divided depends on how much the deal is worth to each participant and what alternatives each participant has.

As readers of Sylvia Nasar’s biography of Nash, A Beautiful Mind, know, Nash contended with schizophrenia from the late 1950s to the mid-1980s. As Nash put it in his Nobel autobiography, “I later spent time of the order of five to eight months in hospitals in New Jersey, always on an involuntary basis and always attempting a legal argument for release.” His productivity suffered accordingly. But he emerged from his mental illness in the late 1980s. In his Nobel lecture, Nash noted his own progress out of mental illness:

Then gradually I began to intellectually reject some of the delusionally influenced lines of thinking which had been characteristic of my orientation. This began, most recognizably, with the rejection of politically-oriented thinking as essentially a hopeless waste of intellectual effort.1