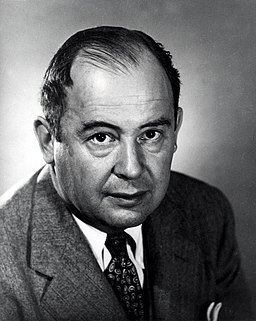 “There are two kinds of people in the world: Johnny von Neumann and the rest of us.” This quote is attributed to Eugene Wigner, a Nobel Prize–winning physicist. John von Neumann, whom people called Johnny, was a brilliant mathematician and physicist who also made three fundamental contributions to economics.

The first is a 1928 paper written in German that established von Neumann as the father of game theory. The second is a 1937 paper, translated in 1945, that laid out a mathematical model of an expanding economy and raised the level of mathematical sophistication in economics considerably. The third is a book coauthored with his Princeton colleague, economist Oskar Morgenstern, titled Theory of Games and Economic Behavior, after Morgenstern convinced von Neumann that game theory could be applied to economics.

In their book, von Neumann and Morgenstern asserted that any economic situation could be defined as the outcome of a game between two or more players. But the semicompetitive/semicooperative nature of most economic situations, in which the value of the outputs is greater than the value of the inputs, increased the complexity, and consequently, the two were unable to offer solutions. “Nash equilibrium” solutions have since been found, addressing the skepticism some economists had expressed about the applicability of game theory to economics.

In addition to game theory, the book gave birth to modern utility theory. Together, von Neumann and Morgenstern revived and mathematically structured the idea that individuals appear to be choosing among alternatives with probabilistic outcomes to maximize the expected amount of some measure of value termed “utility.” This clarified Knight’s concept of risk. The definition of utility they created led to the first coherent theory suggesting how we should make decisions when we know only the probabilities of some events.

The theory of games had been studied before, but after von Neumann and Morgenstern it received far more attention. Partly because of the enormous interest generated by their book, game theory has since been applied to economics, law, political science, and sociology.

Von Neumann was born in Hungary and published his first mathematical paper at age eighteen. He earned a degree in chemical engineering in Zurich and a doctorate in mathematics from the University of Budapest in 1926. In 1933 he joined the Institute for Advanced Study at Princeton. He was the youngest permanent professor of that institution and a colleague of Albert Einstein. In 1943 von Neumann was a consultant to the Manhattan Project at Los Alamos, New Mexico, where the first atomic bomb was built. His work on the bomb led to a presidential appointment to the Atomic Energy Commission in 1955. Von Neumann also helped develop the first electronic computer, the ENIAC, at the University of Pennsylvania.