The Man Versus The State, with Six Essays on Government, Society, and Freedom

The Man Versus The State by Herbert Spencer was originally published in 1884 by Williams and Norgate, London and Edinburgh. The book consisted of four articles which had been published in
Contemporary Review for February, April, May, June, and July of 1884. For collection in book form, Spencer added a Preface and a Postscript. In 1892 the book was reissued with the addition of a few notes in reply to criticism of the first edition…. [From the Publisher’s Note] 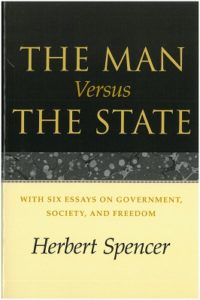 Portions of this edited edition are under copyright. Picture of Herbert Spencer courtesy of The Warren J. Samuels Portrait Collection at Duke University.

This essay first appeared in The Westminster Review
for July, 1853 and was reprinted in Spencer’s Essays: Scientific, Political and Speculative
(London and New York, 1892, in three volumes).

There are two causes principally chargeable with this. In the first place, strange as it may seem in a country in which two-thirds of the population are agriculturists, agriculture is a very unhonoured occupation. Develop in the slightest degree a Frenchman’s mental faculties, and he flies to a town as surely as steel filings fly to a loadstone. He has no rural tastes, no delight in rural habits. A French amateur farmer would indeed be a sight to see. Again, this national tendency is directly encouraged by the centralizing system of government—by the multitude of the officials, and by the payment of all functionaries. From all parts of France, men of great energy and resource struggle up, and fling themselves on the world of Paris. There they try to become great functionaries. Through every department of the eighty-four, men of less energy and resource struggle up to the
chef-lieu—the provincial capital. There they try to become little functionaries. Go still lower—deal with a still smaller scale—and the result will be the same. As is the department to France, so is the arrondissement to the department, and the commune to the arrondissement. All who have, or think they have, heads on their shoulders, struggle into towns to fight for office. All who are, or are deemed by themselves or others, too stupid for anything else, are left at home to till the fields, and breed the cattle, and prune the vines, as their ancestors did for generations before them. Thus there is actually no intelligence left in the country. The whole energy, and knowledge, and resource of the land are barreled up in the towns. You leave one city, and in many cases you will not meet an educated or cultivated individual until you arrive at another; all between is utter intellectual barrenness.

If, then, you can only continue that consumption; if,
by your legislation, under the favor of Providence,
you can maintain the demand for labor and make your trade and manufactures prosperous; you are not only increasing the sum of human happiness, but are giving the agriculturists of this country the best chance of that increased demand which must contribute to their welfare.—
The Times, Feb. 22, 1850.

That before the first reading of any bill for making any work in the construction of which compulsory power is sought to take thirty houses or more, inhabited by the labouring classes in any one parish or place, the promoters be required to deposit in the office of the clerk of the Parliaments a statement of the number, description, and situation of the said houses, the number (so far as they can be estimated) of persons to be displaced,
and whether any, and what, provision is made in the bill for remedying the inconvenience likely to arise from such displacements.

89.
Workhouses supported by the Union of several communities. In Scotland they are called “combination poorhouses.”
90.
“Nunky” diminutive of “uncle.” As we would say, “Uncle Sam pays.”

Though this book leans on political philosophy, economics, and history, it leans on each lightly enough to remain accessible to the educated general reader, for whom it is mainly intended. Its central theme—how state and society interact to disappoint and render each other miserable—may concern a rather wide public among both governors and governed. Most of the arguments are straightforward enough not to require for their exposition the rigour and the technical apparatus that only academic a...
Read This Article