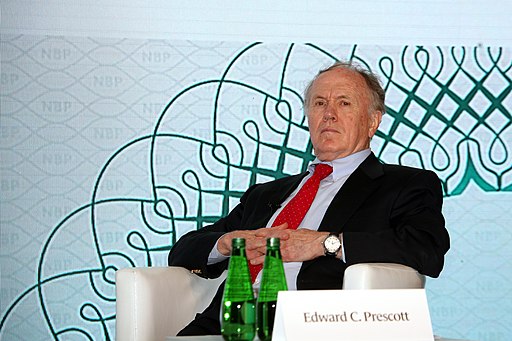 Edward Prescott shared the 2004 Nobel Prize in economic science with finn kydland “for their contributions to dynamic macroeconomics: the time consistency of economic policy and the driving forces behind business cycles.” Because Prescott and Kydland worked together so closely, this biography deals with their work on business cycles. Kydland’s biography deals with their work on time consistency.

In 1982 Prescott and Kydland wrote a paper that fundamentally challenged the Keynesian view that changes in aggregate demand for goods and services drive the business cycle. Prescott’s and Kydland’s article was squarely in the rational-expectations tradition of robert lucas, who had demonstrated that a fundamental problem of standard Keynesian and monetarist models was that their posited relations between aggregate variables (say, consumption and income) were assumed to hold regardless of government policy. Prescott and Kydland speculated that changes in technology could generate many of the fluctuations in employment and output that had been noted in the past, and that changes in aggregate demand were not necessary to explain such fluctuations. In particular, they showed that if the elasticity of supply of labor is three, and if various “shocks” (i.e., unanticipated changes) in total factor productivity (TFP) are persistent and of the right magnitude, their model could account for 70 percent of the fluctuation in output in the postwar United States.

The next step was to see if their key assumptions were reasonable. In 1986, Prescott did find that “shocks” in TFP productivity were persistent and of the right magnitude. But the posited labor supply elasticity of three seemed high. Prescott pointed out in his Nobel prize lecture, though, that this seemed implausible only because most people picture everyone working more in response to higher wages, when what really happens is that a small percentage of the population that was not working begins to work.1 In the early 2000s, to check whether such a high responsiveness of work hours to wages was reasonable, Prescott studied work hours in various countries. His reasoning was that because workers would respond to wages net of marginal tax rates, he could see how responsive hours were by studying countries with large differences in marginal tax rates. Canada, the United States, and Japan, he noted, have marginal tax rates of about 40 percent, whereas France, Germany, and Italy have marginal tax rates of about 60 percent. He showed that a labor supply elasticity of three would predict that Western Europeans would work about one-third less than North Americans and Japanese. The evidence confirmed his prediction. Moreover, his posited labor supply elasticity is consistent with the fact that hours worked per person were much higher in France and Germany in the early 1970s when marginal tax rates were substantially lower. It should be noted, though, that many economists still find an elasticity of three to be too high.

In his Nobel lecture, Prescott noted some important conclusions that follow from his and Kydland’s research on business cycles:

We learned that business cycle fluctuations are the optimal response to real shocks. The cost of a bad shock cannot be avoided, and policies that attempt to do so will be counterproductive, particularly if they reduce production efficiency. During the 1981 and current oil crises, I was pleased that policies were not instituted that adversely affected the economy by reducing production efficiency. This is in sharp contrast to the oil crisis in 1974 when, rather than letting the economy respond optimally to a bad shock so as to minimize its cost, policies were instituted that adversely affected production efficiency and depressed the economy much more than it would otherwise have been.

Prescott concluded that the gains in well-being from eliminating business cycles are small or negative, while the gains from eliminating depressions such as the Great Depression and from creating growth “miracles” are large. He noted work by Harold Cole and Lee Ohanian that is also consistent with this encyclopedia’s article on the great depression, suggesting that Franklin Roosevelt’s cartelization of U.S. industries in the early 1930s could have been the reason for the stunning reduction in hours worked per adult over that time.2