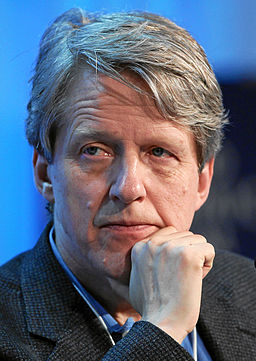 Robert Shiller received the 2013 Nobel Prize in Economic Sciences, sharing it with Eugene Fama and Lars Peter Hansen. The three received the prize “for their empirical analysis of stock prices.”

Shiller argued that rational investors would price a stock at the present value of expected future dividends. However, he found (assuming that the real interest rate is constant) that stock prices fluctuate more than can be explained by fluctuations in dividends. Shiller attributed this larger-than-expected variance to psychological factors, arguing that investors must not be acting rationally (or, at least, not perfectly rationally). Because of this, he concluded, the stock market must be inefficient.

This finding challenged the widely-accepted theory of efficient markets and set off a revolution in finance. It is now recognized that high stock prices relative to earnings signal lower subsequent returns and vice-versa. This means, as George Mason University economist Tyler Cowen has noted, that, in contrast to the efficient markets hypothesis, in the long-term a patient investor should be able to beat the market by betting against short-term market movements.1 So, for example, if the price has fallen more than can be explained by relatively steady dividends, the prudent investor would buy and hold.

Shiller’s reasoning becomes more intuitive when it is applied to forecasting other binary events, such as sports games (stock price movements can be considered binary because the price either increases or decreases). Over many games, the forecasted point differentials have a smaller variance than the games’ actual point differentials. Sometimes a team will win by a lot and other times it will lose by a lot. The forecast reflects the average expected outcome of the game. Shiller equated the stock price to the forecasted point differential and the stock’s realized returns (its dividends) to the results. He found that market forecasts varied much more than their relatively stable observed results. If this occurred in sports, predicted outcomes would vary wildly even if a team nearly always won by a certain margin.

In the 2009 edition of his book Irrational Exuberance, Shiller wrote, “The stock market increase from 1994 to 2000 could not obviously be justified in any reasonable terms. Basic economic indicators did not come close to tripling. Over this same interval, U.S. gross domestic product rose less than 40% and corporate profits rose less than 60%, and that from a temporary recession-depressed base. Viewed in the light of these figures, the stock price increase appears unwarranted.”2 It should be noted that the stock price is derived from the present value of expected future earnings. So if future earnings are expected to be substantially higher than current earnings, a high ratio of price to current earnings could well be justified.

Shiller’s most important contribution to economic measurement is the Case-Shiller index of housing prices, which he developed with economists Karl Case and Allan Weiss. Its main virtue is that, unlike other housing price indices, it is based on data on repeat sales of single-family homes.

Shiller predicted two major asset bubbles, assets prices that are higher than justified by market fundamentals. In March 2000, he claimed that the U.S. stock market had become a bubble. This, in fact, was the height of the dot-com boom. In 2003, Shiller began arguing that the U.S. housing market was experiencing a bubble. In the long run, he argued, housing prices should tend toward the sum of building costs and normal economic profit; this was far outstripped by the housing prices Shiller observed. In the years after 2003, though, housing prices continued to rise, and even at their bottom in 2009, U.S. housing prices were not well below their 2003 level. The Case-Shiller index was at 130 when he claimed the bubble, peaked in 2005 at 175, and fell to a low of 117 in 2009.

In his 2013 book Finance and the Good Society, Shiller shows that while the public typically views finance as something sinister, this view is frequently unjustified. For example, Shiller explains and defends derivatives. The term “derivatives,” he notes, “has become a dirty word.” But a derivative “is merely a financial product that derives from another market, and is not inherently good or evil.”3 Shiller points out that derivatives go back a long way, even having been mentioned by Aristotle. Shiller’s case for derivatives is the standard one: They allow people to, in essence, buy insurance against a loss in the value of an asset.

In Finance and the Good Society, Shiller also wrote that government pensions should be “indexed to some indicator of taxpayer ability to pay, such as GDP.”4 So, for example, the government might allocate x percent of GDP to Social Security and y percent to Medicare and then, based on those percentages, adjust payments and benefits annually. That way, taxpayers and pension recipients split the risk rather than having it all fall on taxpayers.

Shiller has expressed support for substantial government wealth transfers. In an interview in the Wall Street Journal, asked what to do about wealth inequality, he said: “If billionaires turn into multi-billionaires, we don’t let that happen. If you want to make $10 billion and spend it on yourself, we won’t let you. We will take a good fraction of it, and you’ll still be a billionaire, so what?” When asked, “So we would more aggressively redistribute income from the top?,” Shiller responded, “From selfish people at the top who don’t want to give it away.”

Robert Shiller earned his B.A. from the University of Michigan in 1967, and his Ph.D. from MIT in 1972. Shiller was Vice President of the American Economic Association in 2005, and President of the Eastern Economic Association in 2006 and 2007. He has been a research associate for the National Bureau of Economic Research since 1980. His main academic positions have been at the University of Pennsylvania (1974-81), the Wharton School of Business (1981-82), and Yale University (1982-Present.