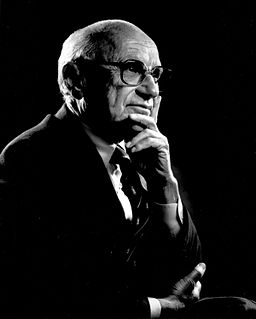 Milton Friedman was the twentieth century’s most prominent advocate of free markets. Born in 1912 to Jewish immigrants in New York City, he attended Rutgers University, where he earned his B.A. at the age of twenty. He went on to earn his M.A. from the University of Chicago in 1933 and his Ph.D. from Columbia University in 1946. In 1951 Friedman received the John Bates Clark Medal honoring economists under age forty for outstanding achievement. In 1976 he was awarded the Nobel Prize in economics for “his achievements in the field of consumption analysis, monetary history and theory, and for his demonstration of the complexity of stabilization policy.” Before that time he had served as an adviser to President Richard Nixon and was president of the American Economic Association in 1967. After retiring from the University of Chicago in 1977, Friedman became a senior research fellow at the Hoover Institution at Stanford University.

Friedman established himself in 1945 with Income from Independent Professional Practice, coauthored with Simon Kuznets. In it he argued that state licensing procedures limited entry into the medical profession, thereby allowing doctors to charge higher fees than they would be able to do if competition were more open.

His landmark 1957 work, A Theory of the Consumption Function, took on the Keynesian view that individuals and households adjust their expenditures on consumption to reflect their current income. Friedman showed that, instead, people’s annual consumption is a function of their “permanent income,” a term he introduced as a measure of the average income people expect over a few years.

In Capitalism and Freedom, Friedman wrote arguably the most important economics book of the 1960s, making a case for relatively free markets to a general audience. He argued for, among other things, a volunteer army, freely floating exchange rates, abolition of licensing of doctors, a negative income tax, and education vouchers. (Friedman was a passionate foe of the military draft: he once stated that the abolition of the draft was almost the only issue on which he had personally lobbied Congress.) Many of the young people who read it were encouraged to study economics themselves. His ideas spread worldwide with Free to Choose (coauthored with his wife, Rose Friedman), the best-selling nonfiction book of 1980, written to accompany a TV series on the Public Broadcasting System. This book made Milton Friedman a household name.

Although much of his trailblazing work was done on price theory—the theory that explains how prices are determined in individual markets—Friedman is popularly recognized for monetarism. Defying Keynes and most of the academic establishment of the time, Friedman presented evidence to resurrect the quantity theory of money—the idea that the price level depends on the money supply. In Studies in the Quantity Theory of Money, published in 1956, Friedman stated that in the long run, increased monetary growth increases prices but has little or no effect on output. In the short run, he argued, increases in money supply growth cause employment and output to increase, and decreases in money supply growth have the opposite effect.

Friedman’s solution to the problems of inflation and short-run fluctuations in employment and real GNP was a so-called money-supply rule. If the Federal Reserve Board were required to increase the money supply at the same rate as real GNP increased, he argued, inflation would disappear. Friedman’s monetarism came to the forefront when, in 1963, he and Anna Schwartz coauthored Monetary History of the United States, 1867–1960, which contends that the great depression was the result of the Federal Reserve’s ill-conceived monetary policies. Upon receipt of the unpublished manuscript submitted by the authors, the Federal Reserve Board responded internally with a lengthy critical review. Such was their agitation that the Fed governors discontinued their policy of releasing minutes from the board’s meetings to the public. Additionally, they commissioned a counterhistory to be written (by Elmus R. Wicker) in the hope of detracting from Monetary History.

Friedman’s book has had a substantial influence on the economics profession. One measure of that influence is the change in the treatment of monetary policy given by MIT Keynesian Paul Samuelson in his best-selling textbook, Economics. In the 1948 edition Samuelson wrote dismissively that “few economists regard Federal Reserve monetary policy as a panacea for controlling the business cycle.” But in 1967 Samuelson said that monetary policy had “an important influence” on total spending. The 1985 edition, coauthored with Yale’s William Nordhaus, states, “Money is the most powerful and useful tool that macroeconomic policymakers have,” adding that the Fed “is the most important factor” in making policy.

The stagflation of the 1970s—rising inflation combined with rising unemployment—gave strong evidence for the Friedman-Phelps view and swayed most economists, including many Keynesians. Again, Samuelson’s text is a barometer of the change in economists’ thinking. The 1967 edition indicates that policymakers faced a trade-off between inflation and unemployment. The 1980 edition says there was less of a trade-off in the long run than in the short run. The 1985 edition says there is no long-run trade-off.