Risk Analysis in One Lesson 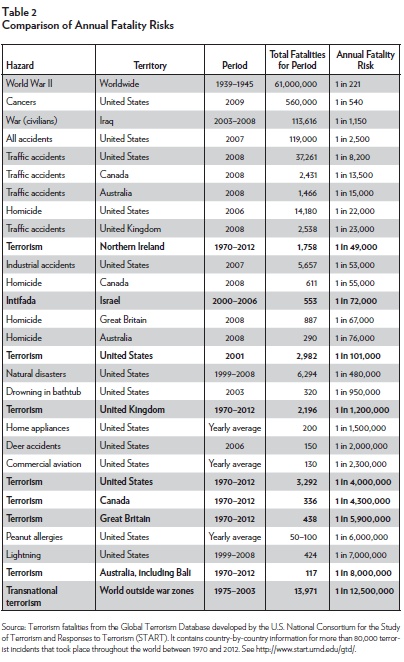 Terrorism is a hazard to human life, and it should be dealt with in a manner similar to that applied to other hazards–albeit with a appreciation for the fact that terrorism often evokes extraordinary fear and anxiety. However, although allowing emotion to overwhelm sensible analysis is both understandable and common among ordinary people, it is not appropriate for officials charged with–and responsible for–keeping them safe.

Risk analysis is an aid to responsible decisionmaking that has been developed, codified, and applied over the past few decades–or in some respects centuries.

Mueller and Stewart provide invaluable information on relative risks.  Terrorism, as all numerate folk know, continues to be a microscopic danger:

When regulators propose a new rule or regulation to enhance safety, they are routinely required to estimate how much it will cost to save a single life under their proposal. Table 1 supplies information about how that calculation comes out for dozens of government rules and regulations in the United States.

Good to know.  But reviewing the basics of risk analysis reminds me of a question I’ve never seen addressed: What about all the utterly ineffective and counter-productive risk regulations?  A $1 regulation that, on balance, kills one person has a cost-per-life-saved of infinity.  Surely some such regulations exist?

Very interesting. I’d love to see that Table 1 (cost per life saved) extended with a couple hundred more examples, and then see the cost per life saved plotted as a scatterplot against variables like year, agency responsible, party of the President at the time, etc. etc.

As for your question at the end, Bryan, it seems to me that you have come full circle, since our “regulatory” actions regarding terrorism – all the lives and all the money we have spent on wars in the Middle East, which certainly don’t seem to have made things better and arguably have made things worse – would certainly seem to be an example of an action intended to regulate risk that had a cost per life saved of infinity.

I would guess the new airport security scanners will kill more people than terrorism, simply from the increase in radiation-related cancers on the large population of air travelers, no matter how slight the effect may be.

Another example is proposed regulation to add audible noise to electric cars so as to reduce accidents for the blind. According to the WHO, for 2006 in the UK alone, an estimated 3,000+ deaths due to heart attacks can be attributed to noise pollution (out of 100,000+). Reducing noise levels, much of which stem from traffic in urban areas, would thus save lives and be precluded by the noise generators. Shades of Bastiat (except his time it is “What is heard, and not heard”).

Last but not least, the Global War on Terror led to the death of thousands of American servicemen and women (not to mention hundreds of thousands of innocent Iraqi and Afghan civilians) at the cost of trillions of dollars, for questionable reduction in terrorist attacks on US soil (most of the reduction can be attributed instead to tightened border controls, smarter policing, and geographic distance from the Middle East).

Somehow it’s as if the lives of members of the armed forces don’t count in the calculus. Probably because they are seen as disposable cannon fodder from working-class backgrounds by the likes of Halliburton, and hardly any member of Congress has offspring serving in the military to worry about. The concept of externalities springs to mind in this context.

Number of deaths is a very incomplete measure of the cost of terrorism, and therefore a poor basis for cost:benefit comparison. Consider the effect of terrorist bombings on tourist visits to Indonesia 2002-2005. The GDP loss of direct tourist spending may have been around a billion dollars per year. Terrorism is not primarily a risk to life; it is an attempt to modify behaviour, including economic behaviour. Mueller and Stewart don’t seem to address the economic costs of terrorism adequately.

Once again, in the “appearances are reality”, I’ll bring up the point that while being affected by numerous perils is hugely unlikely and only affects a few, the *fear* of these perils has very real effects on the quality of life of a huge number of people.

I think an argument could easily be made that measures that appear to address perils (but don’t do so effectively) may have a much larger effect on overall social welfare (by reducing fear as people know that “something’s being done!”) than measures that actually address a peril, but don’t have the reassuring effect of more theatrical measures.

Just because many measures don’t address the desires of the numerically obsessed like us, doesn’t mean that they don’t meet the needs of many citizens.

Just to be clear, no matter how much you value the illusion of safety, I don’t think there’s anyway that anyone sane could value whatever illusion of safety we’re getting from the War on Terror as more valuable than the trillion dollars and the thousands (hundreds of thousands) of lives lost.

On the other hand, a few billion dollars for annoying, useless security theater? That I could see an argument for by making millions of people less afraid of flying or less fearful of jet planes flying overhead.

Is there anyone I can trade my reduced post-1991 risk for atrazine drinking water exposure for a share of that $155 billion?

Wherever the Peltzman Effect is sufficiently strong, one will have net deaths from regulations. I would have thought the effects of seat belts were one potential (though disputed) such case, but then I see Table 1 reports them as net life savers (is that estimate really “standard”?). Maybe the table does not take induced behavioural changes into account? It should though.

Given how many people have died in the war on terror, I am pretty sure the cost is not measured in “per life saved” but “cost per person killed”.

I don’t fully agree with the logic of this analysis. I’m reminded of the boilerplate caution in financial prospectuses: “Past performance is not a guarantee of future results”.

While the historical record might lend some considerable insight into future risks, I would think that risk analysis would also be forward-looking. My observation and intuition tell me that, yes, we likely spend too much on trying to prevent future acts of terrorism relative to the risks it likely presents per capita. But, I’m also aware that one incident could change these league tables overnight. And, how the assessment of how many lives are at risk strikes me as pretty sloppy. Given our relatively good track record on nuclear energy, should the conclusion be that we can safely de-regulate, or should it be that regulation and risk-avoidance measures help explain the low casualty rate?

If a terrorist group were to introduce the ebola or similar virus, detonate a small nuclear device, etc., etc., that would change these tables significantly. Risk prevention today is not about preventing World War II—*that* war is history. It is also about anticipating the risks future events may pose.

The cited paper is going into my taxonomy of bad research principles as an example of research that produces a novel or interesting result by using utterly arbitrary data points. Sure, it’s possible to say terrorism is a microscopic risk if you calculate the “risk” of terrorism by picking an arbitrary set of years (in the example, why 1970?) and costs (why is death the only risk considered?) This is bad research because picking over arbitrary dates and/or including other costs would change the results.

As to Bryan’s question, one could look again at this list, and say that unless the numbers are systematic and rigorous (and here they are not) they’re no more than rhetoric. And that’s what similarly crafted points that argue some regulations kill would be.

I think the biggest risk from terrorism is to Moslems living in non Moslem countries. A few terror attacks by Moslems and you could see Moslems and mosks attacked by the local population but the threat to the west is small.

The people most at risk from terrorism (of the radical islamist variety) are Muslims of other branches (given how marginal the Wahhabi-Salafi cult is, that effectively means most Muslims in the Middle East), and to non-muslim minorities like Christians, Jews (well, there are not that many left in the first place), Yazidis, Druzes, Alawites, etc.

ISIS has killed a handful of Westerners in a spectacularly bloody fashion to intimidate Western governments, but they have killed hundreds to thousands of Shias, Kurds, Christians and Yazidis. Their predecessor Al-Qaeda killed more Muslims (in places like Iraq) than they did Americans during 9/11. The Taliban primarily kill Afghans and Pakistanis.

Hatred begins close to home. This is not specific to Islamists – the Catholic Church’s treatment of Jews was despicable, but it was far more implacable towards Protestants, and vice versa (see the St Bartholomew Day massacre). Stalin probably killed more Old Bolsheviks than White Russians.

I wanted to let you know that on Wednesday, October 22, Intelligence Squared US will hold a debate on the motion "Income Inequality Impairs The American Dream of Upward Mobility." This is the opening sentence of a note I received from Ray Padgett. Here's the public announcement. I don't think that the participants wi...

Risk Analysis in One Lesson

Mueller and Stewart's new piece on "Responsible Counterterrorism Policy" doubles as a great primer on risk analysis:Terrorism is a hazard to human life, and it should be dealt with in a manner similar to that applied to other hazards--albeit with a appreciation for the fact that terrorism often evokes extraordinary fea...