Neoliberalism is making the world much more equal 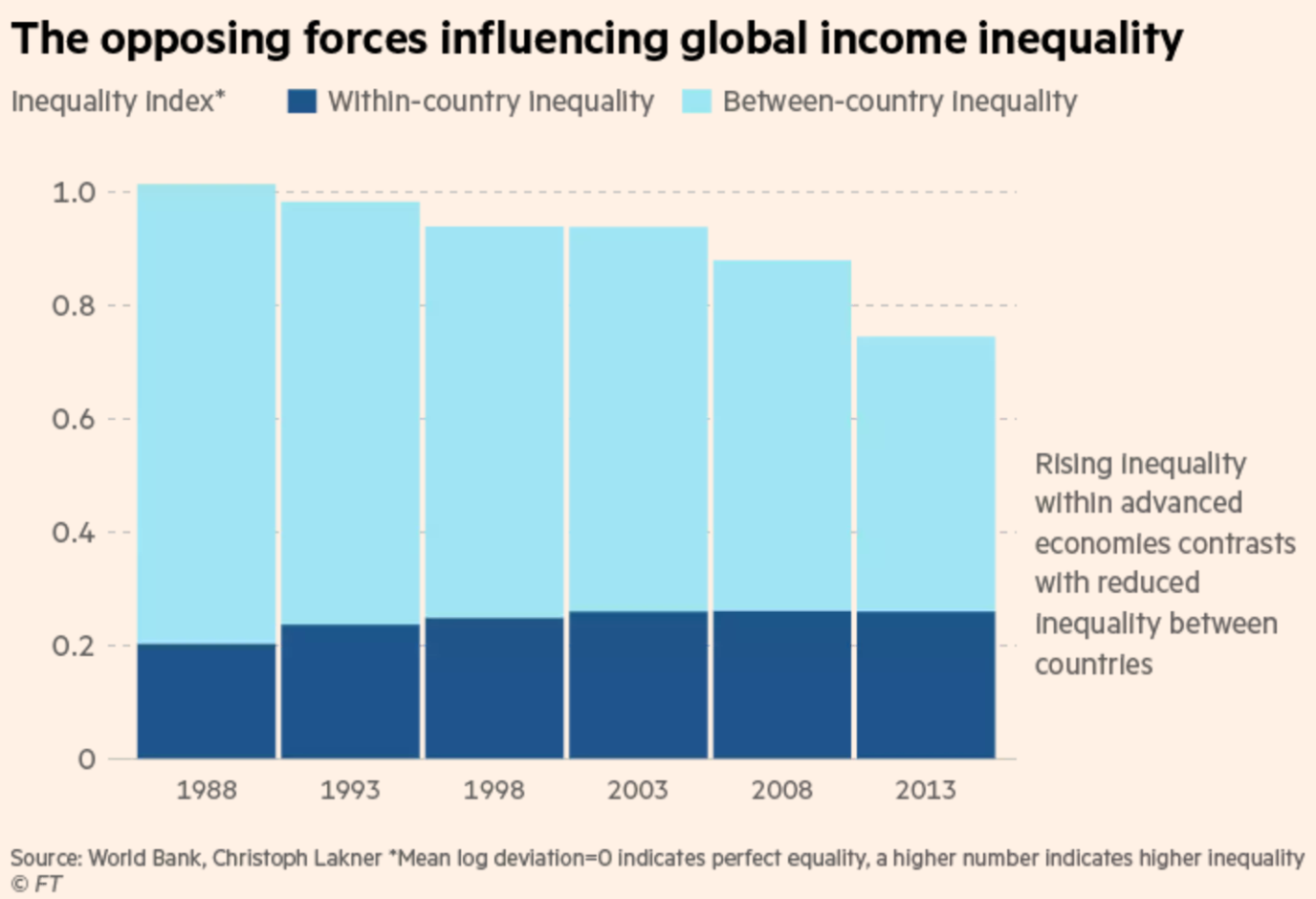 It’s puzzling to me that so many progressives view the term ‘neoliberalism’ with disdain. A new article by Cardiff Garcia shows that the world is becoming much more equal. And that trend is being spurred by less between country inequality—within country inequality has actually risen slightly:

It seems likely that much of the reduction in between country inequality is caused by market reforms in places like China, India, and the ASEAN group.

Neoliberalism might just be the best thing that ever happened.

And yet I think the [free market] approach would fail in the USA. A privatized NYC subway would act like the cable companies, which are monopolies and awful. US airlines are semi-competitive and manage to be awful too.

I think there is a tendency for people to look at an actual market outcome in the US and assume the results reflect market forces. Airlines are not a free market, indeed the US government bans foreign airlines from serving America routes, even though they often provide much better service. When US car companies started facing serious competition from foreign automakers, they dramatically improved the quality of US cars. Privatizing airports, air traffic control and airport security would also improve the flying experience.

I would add that my cable TV company in Boston (which faced competition from other cable companies), provided about 10 times better service than the NYC subway.

What is called neo-liberalism in practice has not lived up to neo-Liberalism in theory which is to use the market to maximize incomes (in areas where market outcomes can be expected to be optimal) and smart regulation and income transfers to further boost growth and offset any distributional consequences of market reforms.

In contrast, we did not compensate manufacturing workers for trade liberalization or higher EITC instead of minimum wages, did not use a carbon tax instead of “clean energy” offsets, etc. Privatization too often just replaced state monopolies with private ones. Neo liberal reforms like higher density housing reducing occupational licensing has progressed verrrry slowly.

And the failure of government to invest in activities with future benefits and present costs according to an NPV rule, especially during 2008-20017 (“austerity”) has, quite unjustly been labeled “neo-Liberal.”

Here are some numbers

I couldn’t find any comparable stats for the number of free drinks served by attractive women but I’m sure that was much better in the past.

Sorry, on previous post the fatality rate is the aggregate number of deaths. The rate per 100 mpm is about 44 (but that includes general aviation deaths and so its not the best comparison.)

BTW, the radical improvement in safety was caused mostly by changes made by airlines and airplane makers (better cockpit resource management and lots of improved hardware). It’s unfair to say that the FAA didn’t change at all They now use many fewer paper strips for flight following and there’s some talk of using these new-fangled gizmos called GPS to locate aircraft.

London’s subways were also largely privately built and only subsequently nationalised. The idea that infrastructure can only be built and operated by Governments is wrong.

https://en.wikipedia.org/wiki/Impact_of_the_privatisation_of_British_Rail#/media/File:GBR_rail_passengers_by_year_1830-2015.png – I think the shows that despite the usual false nostalgia revealed preference shows that the privatised companies are much better than the nationalised one.

On US airlines – I do agree that competition is too restricted and the ban on foreign airlines is just blatant protectionism, but I think largely US travellers are getting what they want – lowest cost possible. You can always travel in Business or First class if you prefer the high service model that people remember from previous years.

1.The “equality” fetish sadly includes most neoliberal free marketeers. One can advocate widespread improvement in wealth, income and non-market access to economic goods. Call it economic progress if you want. But “equality” as symbolized with = is a chimera.
2. And very good to point out that everything in the private sector is not a “free market.” I would include most hospitals, whether non-profit or profit seeking entities. Their patients do not have “equal” information or, often, rudimentary information upon which to make a choice. And where is the price information and the competitive pressures that constitute a “free market.” And we might be a bit more “liberal” in conceding that no, or very few, markets are pristinely free markets.

In addition to competition in comfort (or lack thereof) and pricing of U.S. airlines, another market “force” is the convenience factor of airline flight schedules (time IS money, after all). …which is not often visualized as well as this video does it (caveat: there’s an ad at the end for “Clear,” whatever that is):

Privatization creates benefits only because of competition.

You mention privatizing Air Traffic Control. This would create a monopoly, one whose use is required by law, with very little political accountability. It would make the cable company look as generous and caring as your doting grandmother.

I’m curious why you pick on the NYC subway so much? It certainly doesn’t appear to be as good as some of the transit options in Asia, but compared to the systems in other places in the U.S. and even Europe it seems better, and most importantly a lot cheaper. I can get to just about anywhere in the city for under $3 24 hours a day. A few years back I spent more on a Tube ride to my hotel, than I did on the plane trip from Germany, and almost every other city I’ve been in shuts down transit for some period of time at night.

It certainly isn’t perfect, trains are often crowded, and during rush hour there can be delays pretty regularly due to not enough capacity and big constraints on building more. And even a $6 round trip is more than I can afford to spend for transportation every day, so I bike as much as I can and save the train for days when I need to wear a suit or the weather is bad, but I love that I have that option at a low price when I need it.

On my vacation, which is coming to an end, the first book I read was Daniel Schulman's Sons of Wichita. It's subtitled "How the Koch Brothers Became America's Most Powerful and Private Dynasty." Written by an editor of Mother Jones, Sons of Wichita is, in my semi-informed opinion, largely fair. I found this passage in...

Some thoughts on stock prices and risk of nuclear ...

Lars Christensen and Alex Tabarrok have some interesting posts on the question of how the risk of nuclear war might impact the stock market. A few comments: 1. I basically agree with Alex's post, but would frame it slightly differently. I think what he's basically saying is that stock prices are relative prices. I...

Neoliberalism is making the world much more equal

It's puzzling to me that so many progressives view the term 'neoliberalism' with disdain. A new article by Cardiff Garcia shows that the world is becoming much more equal. And that trend is being spurred by less between country inequality---within country inequality has actually risen slightly: It seems likely that...