I’m now free to post my tribute to Harold Demsetz, which appeared in the Wall Street Journal on January 13 (January 14 print edition.) It was titled “Chicago’s Lesser-Known Free Marketeer.” Here it is:

Harold Demsetz, who died Jan. 4 at 88, was one of the greatest economists of the 20th century not to win a Nobel Prize. He made major contributions to the economics of property rights and industrial organization. He was also one of the few top economists of his era to communicate almost entirely in words and not math.

In 1967 he argued that property rights develop where the gains from enforcing them exceed the costs. In the 1970s he destroyed the then-dominant view that industrial monopolies or oligopolies are inherently inefficient. Companies that achieve large market share through economies of scale or superior performance will eventually face competition. Not so for government-made monopolies. “The legal route of monopoly runs through Washington and the state capitals,” he wrote. 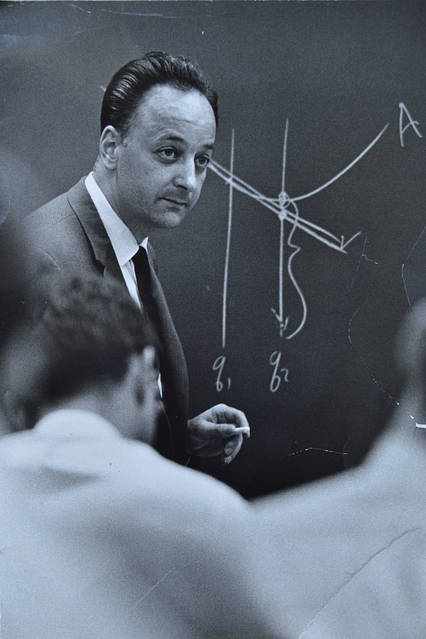 Perhaps Demsetz’s most enduring contribution to social science came in 1969, when he coined what is now known as the “nirvana fallacy” in a critique of fellow economist Kenneth J. Arrow’s assumption that government could make markets more efficient. Demsetz conceded that perfect government intervention might improve things, but noted that Arrow, like many economists, had failed to show that actual government intervention would: “Those who adopt the nirvana viewpoint seek to discover discrepancies between the ideal and the real and if discrepancies are found, they deduce that the real is inefficient.”

Economists often use negative “externalities” as a justification for government regulation. One standard example is pollution. Companies benefit from polluting but bear few of the costs. Many economists recommend taxing polluters to disincentivize their behavior.

But as Demsetz pointed out, companies aren’t the only ones that impose negative externalities. Like his more famous University of Chicago colleague Milton Friedman, Demsetz strongly opposed conscription: “Perhaps one of the most significant cases of externalities is the extensive use of the military draft.” The government avoids having to pay soldiers well enough to make a draft unnecessary. That cost falls on the conscripts, who aren’t compensated fairly for the risks and opportunity costs of serving in the military. “It has always seemed incredible to me that so many economists can recognize an externality when they see smoke but not when they see the draft,” Demsetz wrote.

He was also an early defender of gay rights. At the September 1978 Mont Pelerin Society meeting in Hong Kong, he decried a California ballot initiative that would have banned homosexuals from teaching in public schools, ignoring snickers from some in the crowd. The initiative went down to a well-deserved defeat, helped by the opposition of Demsetz’s fellow Californian Ronald Reagan.

In 1963, when Demsetz was on the UCLA faculty, a University of Chicago economist named Reuben Kessel asked him if he was happy there. Demsetz, sensing an offer in the works, answered, “Make me unhappy.” Chicago did just that, and Demsetz spent eight very productive years there—eight years that changed the course of economics forever.

He was a generous mentor. In early 1970, when he gave three talks at my libertarian club at the University of Winnipeg, he persuaded me, a math major, to get a doctorate in economics. After he returned to UCLA, he supervised my dissertation.

Nice tribute. Wonderful insight that conscription of individuals is a government imposed externality.

Thanks, David. That’s one of my favorite Demsetz quotes.

An excellent remembrance! Harold Demsetz understood property rights! His analysis of the Quebecois Indians’ use of property rights to maintain the beaver was extremely useful, especially as PERC (the Property and Environment Research Center) was just starting and looking for enlightening examples.

Agreed, Jane. That paper I first read as an undergrad and was really when I first appreciated marginal thinking and the power it has

What is the distinction between a mercenary soldier of a state and a mob hitman?

In libertarian circles, does the mob hitman present a less offensive figure as he is not associated with the Leviathan?

A great tribute to a great man

David Flath, a fellow UCLA graduate who was in my cohort that entered UCLA in September 1972, wrote the following when I posted on Facebook:

One thing about my mentor Demsetz that most impressed me was his way of commenting during workshops. He would aim his comment directly at the weakest points in the argument, but did not stop there. After the speaker had responded, he would then himself respond to his own point, suggesting a way to overcome the difficulty or correct the problem he had raised. I have rarely seen any other economists do that, and none as well as Demsetz.

"Whether restaurant owners should allow smoking is not a public-policy problem. It's a totally private issue, and the person who should make the decision is the property-rights owner." Should restaurants allow smoking or not? Should schools teach evolution or intelligent design or both? Should insurance companies cover contraception? Should I be able to take off my shoes in your living room? You might think that that last question doesn't belong with the first three. After all, t...
Explore More