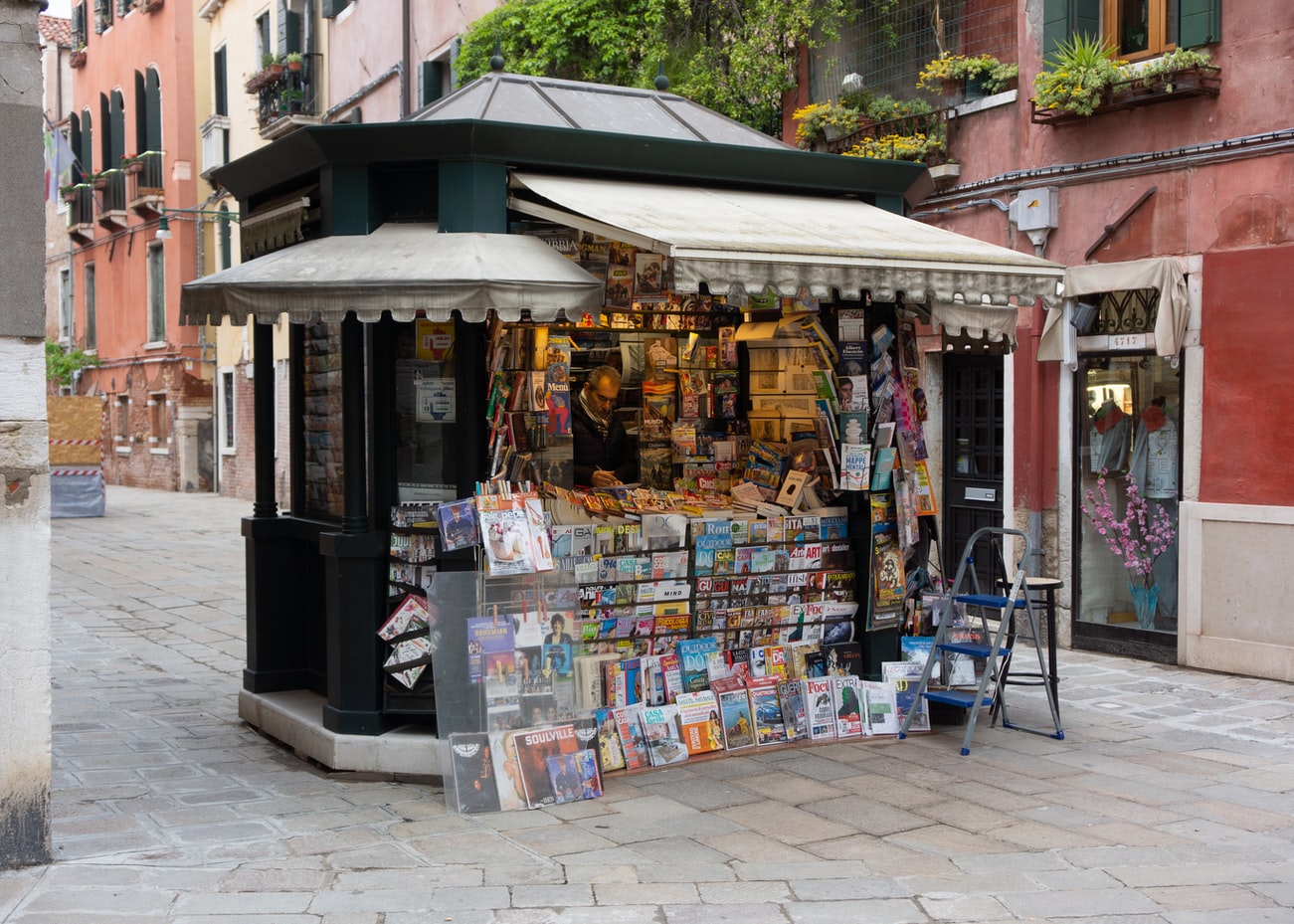 “
Free market” is a summary term for an array of exchanges that take place in society. Each exchange is undertaken as a voluntary agreement between two people or between groups of people represented by agents. These two individuals (or agents) exchange two economic goods, either tangible commodities or nontangible services. Thus, when I buy a newspaper from a newsdealer for fifty cents, the newsdealer and I exchange two commodities: I give up fifty cents, and the newsdealer gives up the newspaper. Or if I work for a corporation, I exchange my labor services, in a mutually agreed way, for a monetary salary; here the corporation is represented by a manager (an agent) with the authority to hire.

Both parties undertake the exchange because each expects to gain from it. Also, each will repeat the exchange next time (or refuse to) because his expectation has proved correct (or incorrect) in the recent past. Trade, or exchange, is engaged in precisely because both parties benefit; if they did not expect to gain, they would not agree to the exchange.

This simple reasoning refutes the argument against free trade typical of the “mercantilist” period of sixteenth- to eighteenth-century Europe and classically expounded by the famed sixteenth-century French essayist Montaigne. The mercantilists argued that in any trade, one party can benefit only at the expense of the other—that in every transaction there is a winner and a loser, an “exploiter” and an “exploited.” We can immediately see the fallacy in this still-popular viewpoint: the willingness and even eagerness to trade means that both parties benefit. In modern game-theory jargon, trade is a win-win situation, a “positive-sum” rather than a “zero-sum” or “negative-sum” game.

How can both parties benefit from an exchange? Each one values the two goods or services differently, and these differences set the scene for an exchange. I, for example, am walking along with money in my pocket but no newspaper; the newsdealer, on the other hand, has plenty of newspapers but is anxious to acquire money. And so, finding each other, we strike a deal.

Two factors determine the terms of any agreement: how much each participant values each good in question, and each participant’s bargaining skills. How many cents will exchange for one newspaper, or how many Mickey Mantle baseball cards will swap for a Babe Ruth, depends on all the participants in the newspaper market or the baseball card market—on how much each one values the cards as compared with the other goods he could buy. These terms of exchange, called “prices” (of newspapers in terms of money, or of Babe Ruth cards in terms of Mickey Mantles), are ultimately determined by how many newspapers, or baseball cards, are available on the market in relation to how favorably buyers evaluate these goods—in shorthand, by the interaction of their supply with the demand for them.

Given the supply of a good, an increase in its value in the minds of the buyers will raise the demand for the good, more money will be bid for it, and its price will rise. The reverse occurs if the value, and therefore the demand, for the good falls. On the other hand, given the buyers’ evaluation, or demand, for a good, if the supply increases, each unit of supply—each baseball card or loaf of bread—will fall in value, and therefore the price of the good will fall. The reverse occurs if the supply of the good decreases.

The market, then, is not simply an array; it is a highly complex, interacting latticework of exchanges. In primitive societies, exchanges are all barter or direct exchange. Two people trade two directly useful goods, such as horses for cows or Mickey Mantles for Babe Ruths. But as a society develops, a step-by-step process of mutual benefit creates a situation in which one or two broadly useful and valuable commodities are chosen on the market as a medium of indirect exchange. This money-commodity, generally but not always gold or silver, is then demanded not only for its own sake, but even more to facilitate a reexchange for another desired commodity. It is much easier to pay steelworkers not in steel bars but in money, with which the workers can then buy whatever they desire. They are willing to accept money because they know from experience and insight that everyone else in the society will also accept that money in payment.

The modern, almost infinite latticework of exchanges, the market, is made possible by the use of money. Each person engages in specialization, or a division of labor, producing what he or she is best at. Production begins with natural resources, and then various forms of machines and capital goods, until finally, goods are sold to the consumer. At each stage of production from natural resource to consumer good, money is voluntarily exchanged for capital goods, labor services, and land resources. At each step of the way, terms of exchanges, or prices, are determined by the voluntary interactions of suppliers and demanders. This market is “free” because choices, at each step, are made freely and voluntarily.

The free market and the free price system make goods from around the world available to consumers. The free market also gives the largest possible scope to entrepreneurs, who risk capital to allocate resources so as to satisfy the future desires of the mass of consumers as efficiently as possible. Saving and investment can then develop capital goods and increase the productivity and wages of workers, thereby increasing their standard of living. The free competitive market also rewards and stimulates technological innovation that allows the innovator to get a head start in satisfying consumer wants in new and creative ways.

Not only is investment encouraged, but perhaps more important, the price system, and the profit-and-loss incentives of the market, guide capital investment and production into the proper paths. The intricate latticework can mesh and “clear” all markets so that there are no sudden, unforeseen, and inexplicable shortages and surpluses anywhere in the production system.

But exchanges are not necessarily free. Many are coerced. If a robber threatens you with, “Your money or your life,” your payment to him is coerced and not voluntary, and he benefits at your expense. It is robbery, not free markets, that actually follows the mercantilist model: the robber benefits at the expense of the coerced. Exploitation occurs not in the free market, but where the coercer exploits his victim. In the long run, coercion is a negative-sum game that leads to reduced production, saving, and investment; a depleted stock of capital; and reduced productivity and living standards for all, perhaps even for the coercers themselves.

Government, in every society, is the only lawful system of coercion. Taxation is a coerced exchange, and the heavier the burden of taxation on production, the more likely it is that economic growth will falter and decline. Other forms of government coercion (e.g., price controls or restrictions that prevent new competitors from entering a market) hamper and cripple market exchanges, while others (prohibitions on deceptive practices, enforcement of contracts) can facilitate voluntary exchanges.

The ultimate in government coercion is socialism. Under socialist central planning the socialist planning board lacks a price system for land or capital goods. As even socialists like Robert Heilbroner now admit (see socialism), the socialist planning board therefore has no way to calculate prices or costs or to invest capital so that the latticework of production meshes and clears. The experience of the former Soviet Union, where a bumper wheat harvest somehow could not find its way to retail stores, is an instructive example of the impossibility of operating a complex, modern economy in the absence of a free market. There was neither incentive nor means of calculating prices and costs for hopper cars to get to the wheat, for the flour mills to receive and process it, and so on down through the large number of stages needed to reach the ultimate consumer in Moscow or Sverdlovsk. The investment in wheat was almost totally wasted.

Market socialism is, in fact, a contradiction in terms. The fashionable discussion of market socialism often overlooks one crucial aspect of the market: When two goods are exchanged, what is really exchanged is the property titles in those goods. When I buy a newspaper for fifty cents, the seller and I are exchanging property titles: I yield the ownership of the fifty cents and grant it to the newsdealer, and he yields the ownership of the newspaper to me. The exact same process occurs as in buying a house, except that in the case of the newspaper, matters are much more informal and we can avoid the intricate process of deeds, notarized contracts, agents, attorneys, mortgage brokers, and so on. But the economic nature of the two transactions remains the same.

This means that the key to the existence and flourishing of the free market is a society in which the rights and titles of private property are respected, defended, and kept secure. The key to socialism, on the other hand, is government ownership of the means of production, land, and capital goods. Under socialism, therefore, there can be no market in land or capital goods worthy of the name.

A common charge against the free-market society is that it institutes “the law of the jungle,” of “dog eat dog,” that it spurns human cooperation for competition and exalts material success as opposed to spiritual values, philosophy, or leisure activities. On the contrary, the jungle is precisely a society of coercion, theft, and parasitism, a society that demolishes lives and living standards. The peaceful market competition of producers and suppliers is a profoundly cooperative process in which everyone benefits and where everyone’s living standard flourishes (compared with what it would be in an unfree society). And the undoubted material success of free societies provides the general affluence that permits us to enjoy an enormous amount of leisure as compared with other societies, and to pursue matters of the spirit. It is the coercive countries with little or no market activity—the notable examples in the last half of the twentieth century were the communist countries—where the grind of daily existence not only impoverishes people materially but also deadens their spirit.

Murray N. Rothbard, who died in 1995, was the S. J. Hall Distinguished Professor of Economics at the University of Nevada in Las Vegas. He was also the leading Austrian economist of the last half of the twentieth century. This article was edited slightly to reflect the demise of various communist countries.

Introducing her recent book1 devoted mostly to contesting certain ethical defences of the free market, the young Cambridge philosopher Serena Olsaretti (a little resignedly, it would seem) remarks that the market in its diverse variants is now accepted across the whole political spectrum. For the foreseeable future, the question "should we have a market?" will not seriously arise. Is not this all the more reason to question the morality of what she calls the "unbridled" form of the market? ...
Read This Article
SHARE
POST:

Introducing her recent book1 devoted mostly to contesting certain ethical defences of the free market, the young Cambridge philosopher Serena Olsaretti (a little resignedly, it would seem) remarks that the market in its diverse variants is now accepted across the whole political spectrum. For the foreseeable future, the question "should we have a market?" will not seriously arise. Is not this all the more reason to question the morality of what she calls the "unbridled" form of the market? ...
Read This Article