The other day I had some fun with the Cato Institute index of economic freedom across states, which finds Florida the freest and New York the least free. (Is it OK for me to write this, comrade commissar?) As I pointed out, freedom Cato-style seems to be associated with, among other things, high infant mortality. Live free and die! (New Hampshire is just behind Florida.)

With his keen eye, contra Krugmanist Robert Murphy points out two huge problems with this one small paragraph. I had missed both.

I missed the first one because I didn’t immediately go and look at the data that Krugman cites about New Hampshire. But take a look at the last 3 sentences, especially the last two of the three:

As I pointed out, freedom Cato-style seems to be associated with, among other things, high infant mortality. Live free and die! (New Hampshire is just behind Florida.)

Almost anyone reading this would think that New Hampshire is just behind Florida not only in freedom but also in high infant mortality. Otherwise the snarky “Live free and die!” wouldn’t make sense. Well, the first part is correct: New Hampshire is up there on freedom. But the second part? Not so much. Murphy writes:

So, as Murphy points out, Krugman’s joke doesn’t make any sense. Which is too bad because whatever else Paul didn’t have going for him, his humor was often first-rate, as in this case.

The second slip that Murphy notes is one I missed because I don’t read Krugman’s columns as frequently or as carefully as I used to. Murphy writes:

Before diving into the meat of the dispute, let me note something hilarious: Literally the day after Krugman mocks the Cato Institute for ranking U.S. states according to their freedom—such that the state in last place, New York, must be a “socialist hellhole” ha ha—Krugman wrote a column warning his readers that freedom was on the verge of disappearing in America.

Murphy then gives a screen shot showing the contrast: 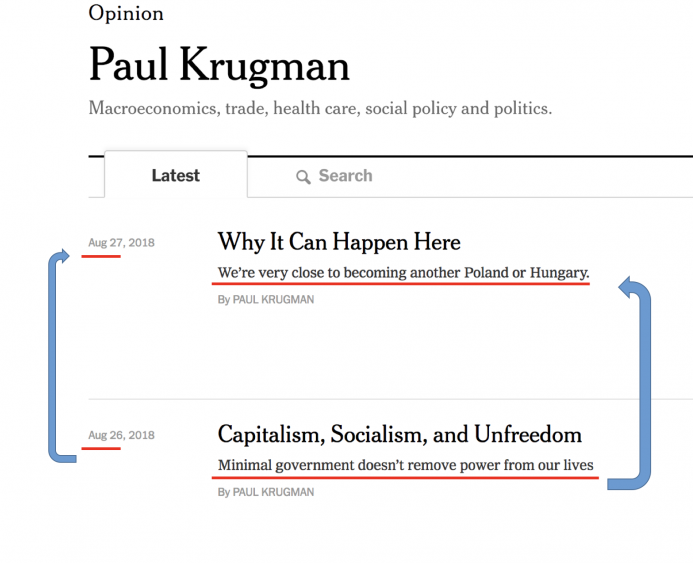 Is it OK for me to write this, commissar, asks Krugman? Apparently yes on August 26 when he makes fun of other people who care about freedom but not on August 27 when, in his view, we’re not just close, but very close, to becoming another Poland or Hungary.

Murphy, by the way, digs into the Cato study data a lot and has interesting things to say about freedom and where people move.

I thought it was also funny that Krugman spent some time mocking the idea that Florida was the most free and New York the least free, citing things like high union membership in N.Y. and saying freedom must be fine if you don’t need a boost.

In his column from Thursday (For Whom the Economy Grows), Krugman says that “the median male worker earns less now than he did in 1979”, links to FRED’s time series for median usual weekly real earnings of men, and goes on saying that “median real wages have gone nowhere”, dropping the mention of men.

I clicked over to the CDC table expecting, from PK’s snark, to find Florida near the top for infant mortality rate. Instead, it’s pretty much smack dab in the middle; not great, but not awful either. Its reported rate (6.1) is just a tad over the rate for the US as a whole (5.9). That leaves me even more mystified about what PK is trying to say.

Less important, I’m equally befuddled by PK’s misquote of our state motto: it’s “Live Free or Die”. Is the “or” ⇨”and” substitution supposed to be clever? Freudian slip?

He’s just trying to be snarky

There’s a big difference between the fascism Krugman’s referring to, and New York’s overregulated corruption.

Both should be disdsined, but one is far worse than the other.

Just another random thought: neither Cato nor the CDC lists the District of Columbia in its rankings, but its latest reported (2014) infant mortality rate (http://www.dchealthmatters.org/index.php?module=indicators&controller=index&action=view&indicatorId=289&localeId=130951) is 7.6, well above the national average, and higher than all but a handful of states.

I’m not sure where DC would rank freedom-wise, but nobody seems to be confusing it with Galt’s Gulch.

Paul A. Sand writes, “I’m not sure where DC would rank freedom-wise, but nobody seems to be confusing it with Galt’s Gulch.”

Easy to answer as DC has no freedom.  They are under the thumb of Congress and the so called ‘home rule’ that came about several decades ago is easily usurped if the party running Congress takes exception.

I’m surprised Krugman published that on 8/26. On 8/24 he posted it on Twitter and was called out by a Notre Dame professor for how ridiculous it was: “C’mon, Dr. Krugman! You had to know someone would check your stats. It’s not even statistically significant.” with some actual statistics below.

But more generally, any of the 50 states are going to rank last in some unflattering statistic. So it follows that no matter what methodology Cato used, Krugman could have found something similar. In light of this, what exactly does Krugman think he’s proved? Ultimately this type of argument is only persuasive to those without any critical thinking ability.

I was wondering what the actual correlation was; that’s the only thing that matters. Krugman is both unabashedly cherry picking both in terms of the state he chooses to discuss and the variable. To think this is a Nobel prize winner.

Ultimately this type of argument is only persuasive to those without any critical thinking ability.

The problem being that so many people do not participate in critical thinking. And often vote accordingly.

I went to the second Krugman piece (on losing freedom) and read it and a few of the more recommended  comments.  I am disturbed that a major American newspaper and its readers can be so deep in the throes of partisan hysteria.  Come on, guys.  Get a grip!

Krugman has not been relevant for years! Grumpy Economist, “How did Paul Krugman get it  so  wrong?” Is there a pattern here?